Barney is a very rich billionaire who owns multiple businesses. In almost every episode he appears in, Barney is seen working at one of his jobs. When he's working at this job, he is dressed in a hat that is related to his job and is addressed with a word put in front of his own name, related to the particular job.

He is Voiced by Rob Tinkler.

His first appearance was in the second episode on season one episode "All You Need is Cake" where he was being referred to as Cake Barney. He was shown to be the father of a girl named Bake Barnera who was about to get married. He was holding a very fancy and expensive wedding for her and he hired Grojband as the wedding band. He told them that they could only play if they were truly in love so Corey and Laney had to pretend that they were in love and write a new love song for her wedding so that they could eat the cake there. It was also shown that Barney had 3 other daughters, if not more. He appeared again in the episode "One Plant Band" as Salad Barney where he owned a salad bar where Grojband was going to play at but first they had to become vegan so that he would allow them. His last appearance of season 1 was in the episode "Six Strings of Evil" as Bobble Barney where he owned a bobblehead store that Trina went to for a bobblehead doll of Nick. He also appeared in the episode "Rockersize" as Gym Barney where he owned a gym. He was having trouble getting people to work out there because his music was really bad. He appeared in the episode "War and Peaceville" as himself. He attended the 100th anniversary of Peaceville along with Party Danimal and when they found out that the Peaceville national anthem had been stolen from the Mallorys by the Riffins, he and Party Danimal broke out into a fight. Barney appeared again in the episode "Myme Disease," where he was being referred to as Sausage Barney and he was working as a sausage vendor. In this episode, he got attacked by Mimey and his army of mimes, and he was cursed to become a mime and lost the ability to speak. It was Corey's music that lifted the curse and returned to him the ability to talk. He made a cameo in the episode Kon-Fusion, where he was seen running that bar at Fuse This and being referred to as Bar Barney. At the end of the episode, he was seen throwing up and running out of Fuse This because he had to look at Grojband, having their bodies morphed together with the bodies of The Newmans. Finally, he appeared in the Hear Us Rock Special, where after hearing Grojband's announcement that the world was about to end, he donned a mullet wig (calling himself Mullet Barney) and joined the rioting in Peaceville. During the apocalypse, he challenges Mayor Mellow for leadership, and the two charge at each other (with him riding his sausage cart), however, Corey breaks them up by singing If The World Is Ending which leads him to make peace with the Mayor.

Barney is a short bald man with a big nose and some beard stubble. He hears a white shirt with a yellow shirt over it along with an orange tie with yellow polka dots and a pair of gray slacks being held up by a black belt. He also wears a pair of black shoes. In almost every episode, he is seen wearing a different kind of hat related to his job and sometimes he even has different clothing. 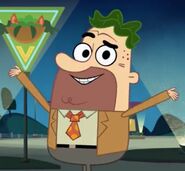 Movie in Your Car Barney 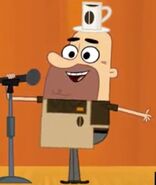 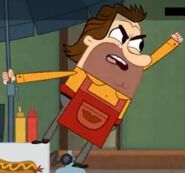 Star Barney
Add a photo to this gallery

Retrieved from "https://grojband.fandom.com/wiki/Barney?oldid=54332"
Community content is available under CC-BY-SA unless otherwise noted.