Candy Jams is a character that appeared in the episode Girl Fest. She is a famous celebrity that sings music for female teenagers and kids.

Candy Jams is tall and has pale white skin and long spiky indigo hair, which she wears with a red headband. She has some of her hair shaved and she wears black eyeliner and a pair of ear piercings. She also has a beauty mark on the side of her face and tattoo on her left arm. She wears a sleeveless red and black striped blouse with a black diamond-encrusted necklace with a skull on it. She also has a bracelet of a similar look to her necklace as well as fingerless gloves. She wears blue shorts with white fringe at the bottom and black leather boots.

Candy Jams passes herself off as a tough feminist girl who makes her own decisions which is the personality that she uses to motivate her fans. However, this is all fake. She is truly a 17-year old girl who has to follow the orders of a guy named Guy Broman. She is boy crazy and is actually the exact opposite of what she says she is. She pretends that she's a free girl to scam her fans for money. At some point she dated Nick Mallory, and although she claims she dumped him, she is still obsessed with him. She also is shown to get excited over clothes and she prefers Guy Broman to write her songs without big words, as they give her 'brain ouchies'. Although she is generally a friendly person, she shoved Laney aside after Grojband's performance in order to promote her make-up. 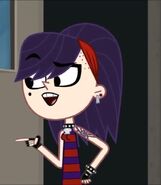 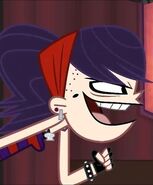 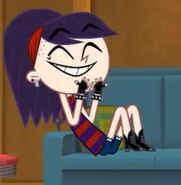 Candy's cameo in Water You Doing.
Add a photo to this gallery

Retrieved from "https://grojband.fandom.com/wiki/Candy_Jams?oldid=54708"
Community content is available under CC-BY-SA unless otherwise noted.