G'ORB is a character that first appeared in the episode Space Jammin', but later returns in Hear Us Rock Part 2. He is a blue space orb that came to planet earth to challenge Grojband to a battle of the bands. He is the band leader of The Orb Experience, and the Orb counterpart of Corey Riffin. He is voiced by Rob Tinkler.

G'ORB is a blue space orb that is the leader of a band called The Orb Experience. He first appeared in the episode "Space Jammin' where he came to earth because he saw a corn crop that he mistook as a challenge to a battle of the bands coming from Grojband. He accepted what he thought was a challenge only to find out that it was just an accident. He persuaded Corey to make it a challenge by saying that he was being a wimpy human. This intimidated Corey and made him change it into a challenge. He threatened to blow up his world after this and left. G'ORB didn't have lyrics for a song to sing at the battle of the bands and his kind was unable to play human instruments. He solved this problem by abducting Kon and forcing him to tell him that his band got all their lyrics from Trina's diary and he possessed the body of Carrie which he used to kidnap Trina. He read a page of Trina's diary and put the lyrics into a song called Entry 4987: My Secret Fear and Junk which turned out being terrible because he didn't make Trina go into a proper Diary Mode for him to get lyrics, unlike Grojband who used her diary to sing the song My Secret is Out making them win the competition. After the G'ORB lost, he left Carrie's body and went back home. G'ORB returned in the episode Hear Us Rock Part 2, where he challenged Grojband to a rematch and threatened to destroy their world with an apocalyptic meteor if they lost, which he already had prepared. The Orb Experience and Grojband were going to have their battle of the bands on the meteor that was going to destroy the world. G'ORB was being a sore loser from last time and decided to betray Grojband instead of fairly beating them in the competition and then destroying the world. Coincidentally, Trina decided to team up with them at the same time and she worked together with them to betray Grojband and have Trina and Nick Mallory be the only living earthling organisms in the universe after the apocalypse. Meanwhile, Trina left her friend Mina to die, which made her furious. She wanted to teach Trina a lesson for that which T'ORB helped her with. The two of them formed a mutiny against Trina and G'ORB. After the orbs betrayed Grojband, T'ORB and Mina came to them and saved Grojband by returning their instruments to them. Mina yelled at Trina for what she did and she took charge, while T'ORB foiled G'ORB's plans as he took him into the spaceship with him and broke up the band. Grojband destroyed their meteor by playing a song and they saved Earth. T'ORB later forces G'ORB to apologize for what he did and admit that he was a sore loser. Mayor Mellow forgives him and gives him a hug, the sound of glass breaking is heard.

G'ORB is a shiny, floating, blue space orb that has a white line in the middle of him that resembles his mouth. The line forms the shape of a smile or a frown depending on his mood and whenever he smiles or "flaxes", the line squiggles. He also has two different sized eyes (the left one is bigger) above his mouth.

G'ORB's personality mirrors that of Corey's. He is the overly confident bandleader, who constantly gets his band into trouble despite their warnings. He has grandiose thought patterns, believing he can do things clearly beyond his abilities. He's rather impulsive with his actions, with T'ORB commenting about how short his attention span is. He always tries to act really tough when in actuality, he has no idea what he's doing and seems to be completely unaware of what consequences follow. Frequently this will lead him to lose at whatever it is that he started, leading him to look like a fool of himself. G'ORB also has a big ego so whenever he loses or gets humiliated, he never takes it well. He acts like a sore loser whenever he loses a competition and he gets really angry whenever someone tries to do as little as correct him when he says something wrong. 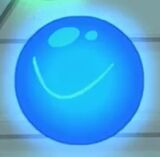 Retrieved from "https://grojband.fandom.com/wiki/G%27ORB?oldid=52381"
Community content is available under CC-BY-SA unless otherwise noted.