Girl Fest is the tenth episode of season two of Grojband. It is the thirty-sixth episode overall.

While Laney is playing her bass guitar, she is rudely interrupted by Kin and Kon emerging from her guitar case, in an attempt to scare her. However, Laney's response indicates they did not succeed. Kon is especially disappointed and asks Corey to tell Laney to "scream like a girl" as it was cool. Laney mocks Kon by asking Corey (in the same tone that Kon did) to tell Kon that he (Corey) couldn't tell her what to do. Corey immediately agrees with Laney, but oddly agrees with Kon as well, saying that "screaming girls are cool" especially if it was for them. He then reveals his newest scheme to make Grojband big, go the place where they could find the most screaming girls of all: "Lady Rage", a girl festival which is featuring famous singer named Candy Jams. Laney protests, saying girls didn't go to Lady Rage to scream at boys, but Corey is unfazed and says it was because girls have never heard of Grojband.

The scene then changes to show Grojband performing on stage at Lady Rage, singing Sweet Dreams from Monster of Rock. Mayor Mellow (who is judging performances), seems impressed by their audition, which excites Corey. But his hopes are quickly dashed when Mayor Mellow very rudely gets mad and rejects them and yells for them to "Get out and never come back!", however, he calms down and explains that Lady Rage was for ladies only. Corey desperately looks around and eyes Laney (who was 'scratching' her nose at the time). He quickly reaches for her, and presents her to the Mayor, saying that he 'thinks' "Laney's a lady" and that "she's full of rage". An embarrassed Laney removes her hand from her nose, but Corey dismisses the nose-picking and claims that Laney is actually the Band Leader. This is enough to impress Mayor Mellow (legitimately this time) and he accepts them for real.

Later, Trina and Mina have also arrived at Lady Rage. By this time the festival is packed with excited girls all eagerly waiting for Candy Jams's limo. Trina, unable to get a front-row seat orders Mina to get one by yelling "Mina, elbows!" Mina elbows several girls out of the way and clears a path for Trina, just in time for Candy Jams to arrive and accidentally knocks Mina to the ground in an attempt to get Candy's attention. After greeting the fans, Candy heads to her dressing room, but Trina, still eager to personally meet Candy pursues her. Trina is barred from entering by Candy's overly large security guard, but she still shouts out a compliment to one of Candy's songs and how she felt it related to her own love to Nick Mallory. But Mina then states Candy was "the voice of Trina's soul", prompting Candy to tell her (in a friendly manner) that she should be the voice of her own soul. Trina scolds Mina for ruining the moment for her. Meanwhile, Grojband is backstage and Corey is still trying to persuade a reluctant Laney, who refuses to change who the band is for "some screaming girls", however Candy appears and is impressed by Laney's rage. She then proceeds to mock Corey and the boys before offering Laney to be her opening act and takes her inside her dressing room. Corey complies to Candy's request for them to "run along and go play" and he asks Kin and Kon to get ready to scare up some screaming girls. However, Kin and Kon take Corey's request literally and dress up as chainsaw maniacs. Corey immediately corrects their mistake, explaining they wanted 'happy screaming' from girls not 'terrified screaming'. Whilst demonstrating the difference Corey mentions 'snakes', but this only encourages Kin and his younger brother further into trying to scare girls.

At the gates of the Lady Rage Festival, Kate and Allie are seen running towards the ticket-booth, excited about meeting Candy Jams, however, the ticket-booth opens up to reveal Corey. The groupies oddly don't display their usual excitement at seeing him or the fact that Grojband will be playing at Lady Rage. However they immediately become excited once they hear Corey has met Candy Jams, they go on to ask Corey a succession of personal questions about Candy. However Kin and Kon show up again carrying snakes, in another attempt to scare some girls. However, this backfires when both of them are attacked by their own snakes. Meanwhile back outside Candy's dressing room, Trina is cheering for Candy (whilst riding on Mina's back), before Nick Mallory shows up (riding on Chloe's back). Trina is excited that Nick is here and asks him if he was here for Lady Rage, but he answers that he was here to see Candy, which Trina interprets as seeing her as a fan. Laney is admiring Candy's dressing room and compliments the star a number of times. She then notices a picture stuck into the mirror's frame which is bright yellow or a supposed 'gold' and asks Candy if that was Nick Mallory. Candy explains that she used to date him but broke up because she got sick of him being so "soft", which increases Laney's respect since most girls went crazy over Nick. However, Laney immediately questions her respect for Candy when Nick Mallory walks through the door and Candy starts swooning over him. Back outside Corey and the Groupies have reached the crowd, and Corey instructs them on how to act once Grojband comes on stage, saying it was important that they were loud with girl screams. Kate assures him that they would be loud (though for different reasons). She brings up one of her favorite Candy songs "Mind over Mister", Corey becomes annoyed assuming the song is about love but is surprised when it involves an exciting story about the God of Rock forming an army to fight the Lord of Silence. A few feet away, Kin and Kon are watching, hidden in some bushes. Kin has come up with another idea of scaring the girls; having Kon "bite the head off a bat". They pull the bush over to Kate and Allie, and Kon emerges to carry out Kin's plan, screaming "I'm insane!". However, Kon misinterprets Kin's meaning and bites a baseball bat. Having failed to scare the girls again, Kin and Kon retreat defeated with a mighty homonym transition.

Outside Candy's dressing room, Trina is still trying to get inside, but Candy's bodyguard continues to refuse. An angry Trina orders Mina to attack the bodyguard and take him out. Mina obeys, clinging on to the bodyguard's head and saying 'Go to sleep' but fails to even budge him. While inside, an annoyed Laney watches while Candy is stroking Nick's photo. She reminds Candy of the music but is interrupted by a man entering with a new order of costumes. Candy happily squeals "Eee! Clothes!", to which the man instructs Candy to wear the leather jacket (as he wrote a song for her about leather jackets), however, Candy says she hoped the new song didn't have any "big words" like the last song, Brain ouchie. Laney approaches shocked at what she just witnessed, Candy is unphased and introduces the man as her manager Guy Broman. Laney confronts Candy, demanding to know how Candy could sing about "being your own girl" when she takes orders "from a dude named Guy Broman". However, Candy excitedly reveals that her show was to launch her new makeup brand and that Laney was going to help. This is too much for Laney and she snaps, shooting flames out of her ears. Back outside, Kate and Allie have finished giving Corey a tour of all the greatest songs made by girls and is impressed by how great they are. A fuming Laney approaches Corey, who unaware of the situation expresses his newfound respect for Lady Rage. However Laney tells Corey that Candy Jams was "a boy-crazy fraud, and the entire show was a sham to sell makeup." Corey misinterprets this as Laney trying to bail out on a gig and tries to talk her out of it, but a furious Laney corrects him and says she wanted to rock the truth out of the festival and bring it down. However, she came to Corey because she needed a new song with lyrics. Corey hadn't yet prepared on how to make Trina go diary this time, but Laney had. She explains that Nick Mallory and Candy Jams used to go out, and tells Corey to give Trina some backstage passes (which she hands to Corey) so that Trina could see this and have a diary meltdown. Corey is impressed at Laney's leadership skills today, saying she really was the band leader. Meanwhile Kin and Kon are still trying to scare the groupies, having dressed as wizards stirring a cauldron of green liquid and attempting to unleash a curse upon the world, however, their stint is wrecked when Corey emerges from the cauldron telling his band to regroup, then Allie exclaims to Kate that it was lame.

Mina is still trying to subdue the bodyguard but only succeeds in boring him, she takes a ninja pose and is about to attack, but Corey slams the door on her to give Trina the backstage passes. Trina rushes in, and asks Candy to play "You can't tell I love you". Candy greets her and says she was planning to sing it anyway, for Nick, to which Nick arrives saying he liked songs about him. Trina is both confused and happy that Nick knows the song was about him, thinking Mina might have told Nick about her feelings, but Candy explains it was because she wrote about him back when they were dating. This shocks Trina, as Candy feels the same way she did, which meant she didn't feel her own feelings. Trina's eyes flame and she blasts into the sky going into Diary Mode. After this finishes, Corey catches Trina's diary and Candy asks Corey "what was that about?" but Corey answers that every lady raged in their own way.

At the stage, Mayor Mellow emerges to open the show and introduce Grojband as the opening act. Grojband performs their new song "You're so Untrue", with Laney as the singer. During the song, Laney sarcastically bawls and exposes everything that Candy and Guy Broman did, which shocks them. This song proves to be a huge success with the audience. Laney thanks the audience and explains that Lady Rage is a scam to buy her new makeup, but this only makes the girls more excited, especially when Candy comes on to further promote her product. Kate and Allie are delighted that now they "can be as true to [themselves] as Candy Jams", and the entire audience (along with Trina) rush forward to collect their makeup, trampling Grojband in the process. Kin and Kon are disappointed how they didn't make a single girl scream, now finally realising girls would only scream on their own. But this doesn't stop them in planning to scare some old ladies.

Back at the Garage, Laney still can't believe how girls could submit into Candy's scam, but Corey goes into his final thought, putting his hand on Laney's shoulder (which she enjoys), and explains how rage made everyone blind and wanting to make other people pay, before finally being able to see who they were. 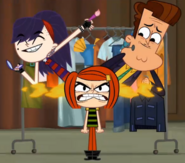 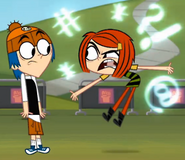 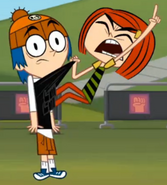 Retrieved from "https://grojband.fandom.com/wiki/Girl_Fest?oldid=54706"
Community content is available under CC-BY-SA unless otherwise noted.