Start a Wiki
Grojband Pilot is the pilot episode of Grojband. This is an extended version of the episode Smash Up Terby.

Corey books a gig at the carnival and they're going to try and impress a celebrity named Chip Chunkley but he doesn't have lyrics.

The episode begins with a bird named Red Breast selling a nest to some other birds. He tells them that they're going to love their home because the neighborhood is very quiet. Just then, a very loud blast of sound shakes the ground and scares the birds away. Red Breast takes the for sale sign and runs. It is then revealed that the sound is coming from Corey playing his guitar in the garage, trying to make a song. He first tries singing a song about a moose head wearing a tie on the wall. However, his song doesn't turn out to be so good. Instead, he tries singing a song about his next-door neighbor and his butt crack getting exposed while he's bending over to trim the hedges. However, this song also turns out to be bad. He tries again with singing a song about some rotten food he threw out init the trash can. He asks the rest of his band if he did any good. Kin and Kon respond simply but laughing. Laney tells him that his music was no good but that the "no" was lowercase. Corey asks her if she really meant that because he was "case sensitive." Laney tells him that she's honest about what she said. Corey's spirits get raised as he asks them if they liked it. However, they all just suck their teeth which tells Corey that they really don't like it. Corey screams in rage because of how terrible he is at writing lyrics. Laney tells him that he needs to think of something fast because they have a gig booked at the Carnival in an hour and that they need a new song before they get there. She then tries sugarcoating it by saying that there's no pressure. However, Kin and Kon come up to Corey and whisper "pressure" in his ear a bunch of times. Laney then adds that Chip Chunkly is going to be there too. Kin and Kon then whisper "Chunkly" in his ear until they stop and realize how amazing it is that he's there. Kin and Kon excitedly explain that Chip Chunkly is one of the most amazing figures in the rock universe. Kin and Kon then jump up into the air and tell a Rock Lore about him, saying that he is someone who can make or break the future of rock bands. Corey tells everyone that everything will definitely work out for them and that nothing will stand in their way, just as he opens the door to the car, revealing Trina. Trina gets out and tells the band that she's not happy with the way their dad is making her drop them off at the Carnival in her car and that if they're going to ride in the car with her, they're going to have to follow her rules. She tells Corey not to sing, Kin not to "nerd," Laney not to shave, and Kon not to fart. Kon responds to this by pulling her finger and making her fart. The band gets in the car and as they do, Trina yells at them, nagging them about keeping her car clean. Kon is excited to get exposure for the band to someone like Chip Chunkley and says that it might make his band the "Gods of rock." Trina complains, asking why she even has to drive Corey and his band to the carnival and Corey reminds her by playing a tape recording of her father telling her to do so. Trina calls her friend Mina over and Mina immediately appears in her car. Still unsatisfied, Trina waits angrily. Mina realizes that she's making a mistake and remembers that she's supposed to compliment her every time she greets her. Mina quickly thinks up a compliment and tells her that she likes her hair. Trina acts like she wasn't even expecting this from her and thanks her for it. Before they can even leave the garage, Kate and Allie are both at the door cheering for Grojband. Trina ignores them and she drives right into them. They both scream and jump out of the way as Trina drives off to the carnival. Kate and Allie text each other, talking about how much of an honor it was to almost get run over by a car with their favorite band inside of it. Then, they both squeal at the tops of their lungs.

Trina is angrily driving down the road and as she is, she destroys everything in her path, from buildings to other cars, to people because apparently, she is not that good of a driver. Mayor Mellow is seen in his car looking very nervous. He is on the lookout for Trina, hoping that she doesn't come anywhere near him and wreck his car. He makes sure he's being as safe a driver as possible, putting on his turn signals and strapping in his seat belt and everything, but as soon as he starts off on the open road, Trina comes blazing at a ridiculously high speed, leaving a trail of flames behind, smashing right into Mayor Mellow's car, spinning him around and making his scream in terror. Mayor Mellow then runs around the car hollering about Trina's bad driving. A picture of his mom is shown to be in the car next to him and Mayor Mellow is talking to her as though she's really there and apparently blaming him for the accident.

Trina continues to recklessly drive down the road, destroying things. One of the cars that she hits, spins wildly off the road and blows up in a fiery explosion. Trina screams out the window at him, telling him to pick a lane. Kin impatiently asks Corey where they'll get lyrics if they survive Trina's driving, hypothetically. Corey says that he will get lyrics by stealing them from Trina's Diary. Trina talks to Mina about Nick Mallory and Corey peeks over the seat and spots her diary in her purse. Trina asks how much Nick likes her on a scale of 1 to 10 and Mina tells her that she's a 10 for sure.  Unsatisfied with the answer, Trina tells her that Mina is blowing smoke and so she changes her answer to 8.6 which makes Trina even more unhappy as she lashes out in rage at her. Mina then comes up with 9.9 which Trina is so happy to hear. Corey goes to Kon and tells him that he has a plan to steal Trina's diary but he has to distract her. Kon lovingly slicks his hair back and tells him that he'll do it with pleasure. Kon goes up to Trina and starts flirting with her. He tells her that he is a voluntary fireman in a video game that he's playing. Trina freaks out because she sees Kon as an inhuman creature and she starts flailing around, trying to avoid making eye contact with him. Meanwhile, Corey slips his hand into Trina's purse and steals her diary. Trina takes out a spray can of what appears to be pepper spray and then sprays Kon in the eyes. Kon screams out in pain but reveals that it's not pepper spray, but peppermint that is stinging his eyeballs. Corey sits back with Trina's diary and looks through her entries, but as he flips through them, he sees that they have already used everything in there and it sends everyone, including him for once, into a panic. 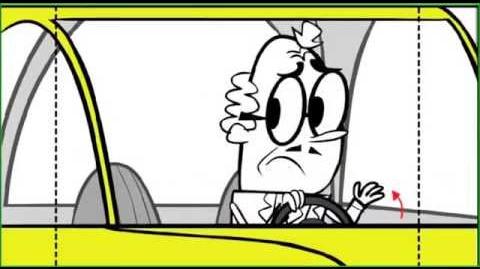 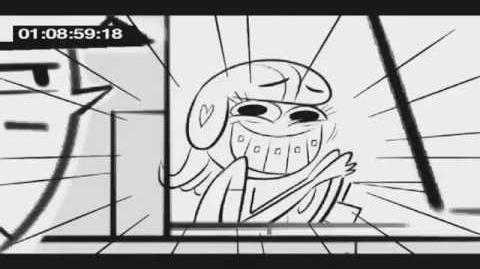 Retrieved from "https://grojband.fandom.com/wiki/Grojband_Pilot?oldid=52809"
Community content is available under CC-BY-SA unless otherwise noted.