In this episode, despite the fact that his band already is indie, Corey makes his band go indie by joining the In-D 400.

The episode begins with Kin and Kon testing out a new stunt. Kin sits in a chair with a Random Stunt Duck on his head. Kon then plucks a string on Laney's Bass, which launches Kin into the air at high speeds, where he crashes head-first into a tree and gets stuck. This scares Mina who is in Trina's Room with Trina who's reading a book. Mina gets scared and lands on Trina's head. Trina sighs over Mina because she's such a scared baby. She tells Mina that she remembers back when she was a scared baby like her and how she changed that by getting a toy when she was a young child called Mr. Mooseface. Trina has a flashback to when she was a little girl and she was scared because she heard a crunching noise happening under her bed. She and Mr. Mooseface looked under there and saw that it was Corey eating chips. Trina screamed in rage at Corey for being under her bed which made him run away in fear. After the flashback, Mina tells Trina that her childhood story of her and Mr. Mooseface is sweet. Trina screams at Mina and then tells her that she's got a job at the Indie 400 as the flag girl and asks her which flag she should use that makes her look cuter. She pulls out two flags that look exactly the same and threatens her to have the same answer as she does.

Corey and Laney come to the garage where Kin and Kon were testing out their new stunt and see Kin stuck in the tree. Laney tells him that she's going to have to pull his funding for stunts. Kin angrily tells her that that's perfectly fine and that he doesn't need her two bucks a day anyway and that he's going to start going indie. This gives Corey the idea to make his band go indie. Corey says that they should start going Indie. Laney tells him that that is what they already are but Corey says that it's not them enough and that he has the perfect idea on where they could go to start their indie career by going indie at the Indie 400.

A commercial for the Indie 400 plays where it advertises what's going to happen at the race. The commercial introduces three of the racers in the Indie 400 who are Monster Chuck, School Bus Rhonda, and Ice Cream Tom. After the commercial, Corey, Kin, Kon, and Laney go to the Indie 400 where they meet Dave and Daver who are hosting the event. They sign up for the race and Corey plans for them to win the race and then rock out playing music there too. Trina and Mina come by and Trina tells them that there is no way that they're going to win because they don't even have a car and that she's going to be the flag girl. Corey tells her that she's wrong and that they're going to go completely indie and win the race and they all go home to build a car. Trina plans to ruin their race for them to make sure they don't win.

Corey, Kin, Kon, and Laney all go into the garage but then Kin shoves them out and closes the garage door on them so that he can work on building a car for them by himself. Later, Kin opens the garage door where Kon has his shirt lifted up and Corey is checking his back for back nipples. Kin introduces the car he built them called the Grojcar. The Grojcar is a car with an amp on it that serves as it's motor. If they play music on their instruments which are hooked up to the car, the amp lets off a sound wave, causing them to move. Everyone cheers for the Grojcar and Kin sits there with a dull expression on his face. Then he pulls out a puppet and pretends that it's somebody thanking him for building the Grojcar. Then Corey, Kon, and Laney all thank him for building them the Grojcar.

They take the Grojcar back to the Indie 400 and they enter it into the race. Meanwhile, Trina gets an idea on how to ruin Grojband's gig for them. She makes Mina do horrible things to other people's cars. She makes Mina fill all of Monster Chuck's tires with air and pop them, she makes Mina break of School Bus Rhonda's stop sign, and she replaces all of Ice Cream Tom's ice dream with bees. She continues to do this to all of the racers and blames all of the vandalism on Grojband making everyone seek revenge on Grojband and makes them crave to destroy them. The race begins and all the cars take off. Everyone is out to get Grojband and they all try to destroy the Grojcar. Ice Cream Tom tries firing sprinkles at them, but he misses and instead, they hit School Bus Rhonda in the eye. The race goes in like this and after a while, Grojband can't take anymore so they pull over for a pit stop before they get hurt.

While at their pit stop taking a break, Laney asks Corey how they're going to get lyrics for their song. Corey immediately gets an idea and he tells Kate and Allie to steal Mr. Moose Face from Trina's room. Kate and Allie willingly go by the Riffin House where they sneak into Trina's room using spy equipment. They get Mr. Mooseface but then an alarm goes off and they get attacked by security lasers and toxic gasses. Kate and Allie just barely manage to drag themselves back to the Indie 400 safely with Mr. Mooseface and they give it to Corey. Corey straps Mr. Mooseface to the front of their car and they go back into the race again. Trina is watching the race happen from her binoculars so she can see Corey and the band get destroyed. She then sees Mr. Mooseface strapped to the car which makes her freak out because her favorite toy is in danger of getting destroyed, causing Trina to go into Diary Mode. Corey gets her diary and plays music which makes them avoid the other racers and they go fast enough to win the race.

When they win the race, Trina angrily hands the trophy to Corey. Dave and Daver then suggest to help him go completely indie but then Corey denies to and then tells his moral. He says that from going through all the trouble of being an indie band, they'd rather not do that. Nobody understands his reasoning for it but he doesn't care and he closes the garage door and the random stunt duck flies by. Then, the episode ends.

For more information about this section, visit: Indie Road Rager/Gallery 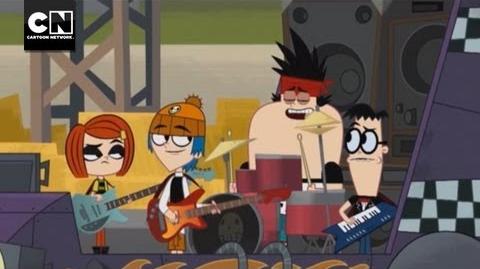 Retrieved from "https://grojband.fandom.com/wiki/Indie_Road_Rager?oldid=51334"
Community content is available under CC-BY-SA unless otherwise noted.