Grojband books a gig at the Trimathalon, but they find out that they can't play there unless Kon can become better at math. Hence, Kon is forced to learn six years of math in one day in order for his band to play. Meanwhile, Trina enters the competition in disguise as her alter ego known as Trigonometrina.

The episode begins with a commercial for the Trimathalon. (A math competition for all of the biggest nerds at Elementary High to compete at). The commercial is happening on the computer which Corey turns off and announces to the rest of the band that he has booked the band a gig there. Kin thinks that it's awesome that they get to play there but Laney thinks it's nerdy. Corey tries to convince her that it's not so bad but then Kon tells him that he doesn't think he can play there because he's not good at math. Corey tells him that he doesn't need to be good at math to play music at the Trimathalon. The only math he needs to know is how to count them in. Kon counts them in and they start playing music to practice for their gig. Trina is up on the balcony looking down at them in anger, annoyed by the music. She goes into her room, lies down on her bed and she calls Mayor Mellow. Mayor Mellow is at the Trimathalon getting the stage set for the event. He hears ringing coming out of a guy's butt and he pulls a phone out of there and answers it. Trina tells him all about Kon being bad at math. Mayor Mellow tells her that he's not going to let someone play at the competition if they're bad at math.

Later at the Trimathalon, Grojband is with Mayor Mellow and he tells them that he can't let them play if their drummer is a math failure. Then he runs off and fist bumps Trina on his way out. Trina tells them that she's the one who snitched them out and Corey asks her why. Trina tells him that she doesn't want to be at the Trimathalon while listening to him and his band's loud music. Corey is shocked and questions why she's going to the Trimathalon and Trina just tells him that she has her super-secret reasons. Corey goes to Mayor Mellow's office and Mayor Mellow tells him that if Kon can learn three years if math in one day then he will be qualified to play at the Trimathalon. Meanwhile, Kate and Allie are in the bathroom but then get scared away by Trina coming in. Trina dresses in disguise as a nerdy alter ego of hers called Trigonometrina. She gets out of the bathroom and meets up with Mina who is familiar with Trigonometrina but is unaware that she is the same person as Trina. Trigonometrina and Mina are good friends and they decide to go out and have some good math-related fun together before the Trimathalon.

Corey, Kin, and Laney are in the garage, trying to make Kon smart enough to play at the Trimathalon by teaching him three years worth of math in one day. Kin looks inside of Kon's mind to see what he can do to help and then he sees that his mind is a complete war zone. Everything is burning and exploding and there are numbers in his mind that are running around and screaming in insanity, throwing a riot. This makes Kin realize that helping Kon would be hopeless. Then, Kon starts drumming on his desk, saying that drumming is all he's good for. When he does this, he becomes hypnotized and music notes come from him and they land on the chalkboard. Numbers magically appear on the chalkboard and he gets all of the math problems correct. The rest of the band is shocked to see this. They realize that when Kon drums, he enters some sort of a blissful genius trance. This gives them the perfect opportunity to enter Kon into the Trimathalon.

Meanwhile, a montage happens where Mina and Trigonometrina are having lots of fun together before the Trimathalon. They first go to the malt store where they get some brain-boosting smoothies. They then go to see a movie that the other kids don't understand but they come out laughing because they get the reference to a math procedure. Trina and Mina rest back on a hill and start talking. Mina asks Trigonometrina what her favorite number is and she tells her that it's one hundred and one because it's a palindrome prime number. Mina says that her number is eight because it looks kind of like a snowman. Triginometrina then describes how math can be used for revenge formulas where all the variables mean the things that her enemies to that bother her and when she multiplies them all together, x equals how much vengeance she dishes out. Nervously, Mina replies saying that she also likes the number two.

The Trimathalon has begun and Mayor Mellow is hosting it and then they start the challenges that commence between two nerds. The first round had Trigonometrina versing Cameron Buttons. Trigonometrina wins the round and goes on to the next one while Cameron leaves the game. The second round is Kon versing Claire Root. Kon starts drumming and then he gets the problems right and he wins the round. Claire runs away crying and Kon gets the privilege to move on to the next round. A montage begins showing Kon and Trigonometrina making their way to the finale by beating all of the other nerds in every round. Finally, Kon and Trigonometrina both make it down to the two finalists. When Kon starts drumming during the round, his drumsticks break, making him unfit to play the game while Trigonometrina starts to solve the problem. Kin and Laney panic at this as Corey then gets a idea and saves him by throwing a bucket at him and reminding him of Johnny Bongo. Kon then starts drumming on it like a bongo which puts him back into his genius trance. It then shows what is going on inside of Kon's mind which is himself and Trigonometrina fighting with each other in Chinese taekwondo using numbers and mathematical symbols as weapons. Trina uses an energy blast against him which Kon rebounds back to her, turning it from a less than sing into a greater than sign that goes back toward her and hits her, causing her to break from the mind and drop to the ground. Kon finishes the final math problem and wins the Trimathalon and Mayor Mellow awards him with a trophy. Trina complains that she couldn't focus with all of Kon's drumming and uses the hashtag silence move. This makes Corey figure out that Trigonometrina is really Trina. Corey, Kin, and Laney then support Kon but Laney soon comes to the realization that they still require lyrics for a song. Corey sees how angry Trina is and so he flicks his pick at her hair bun, causing it to become undone and her hair gets let down, revealing herself to truly be Trina in disguise in front of all the nerds at the Trimathalon. The nerds are all very happy to see this and they cheer for her which makes her go into Diary Mode. Corey gets her diary and his band plays the song Math Song. As they play this song, Kon has a drum solo which turns all of the nerds into cool people. This, however, is a bad thing because now that all of the nerds have become cool, there can no longer be anybody to run the electricity or water in Peaceville which causes a power outage as a result. Corey gives out his final thought saying that nerds are really important people that we take for granted and that math is an important thing that we all need. He closes the garage door and the episode ends.

For more information about this section, visit: Math of Kon/Gallery 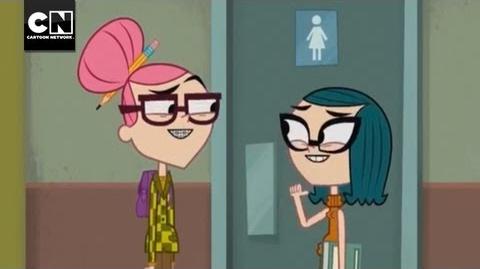 Retrieved from "https://grojband.fandom.com/wiki/Math_of_Kon?oldid=54760"
Community content is available under CC-BY-SA unless otherwise noted.