Mina Beff (originally Bernadette Beff)[2] is Trina Riffin's best friend and lackey. She serves as the secondary antagonist later anti-hero of the show. She is the best friend of Trina, but she is treated badly. She is voiced by Denise Oliver.

Mina is a sweet and nerdy 16-year old girl who is very loyal to Trina Riffin. She gave herself the purpose to be the best friend forever to Trina and she is very committed to fulfilling this duty. Her surname "Beff" is similar to the term "BFF" which is one of the main reasons why she does this. Mina's best friend is Trina Riffin, however, Trina is very rude and abusive to Mina and treats her like a slave. Despite this, Mina still loves Trina very much and she is highly tolerant of Trina's cruelty. No matter how ridiculously horrible Trina acts toward her, she is always shown to effortlessly keep a happy attitude without any struggle or hesitation whatsoever. Although Mina is always getting stepped on by the bossy and self-centred Trina, she enjoys the "rub-off" popularity she gets for being by the side of the girl that she sees as a glamorous and beloved plastic despite the fact that Trina is not popular at all because everybody knows how horrible Trina really is. In the episode "Space Jammin'," it was revealed that Carrie Beff is Mina's younger sister and that she has a cat called Dr Purrs. Although it has never been seen much in the show, this means that they must have a strong relationship with each other. Not much is known about Mina's early life since it hasn't been shown in the show before. However, on some occasions in the show, she has mentioned what her life was like long ago.

It has been confirmed that Mina's name was originally Bernadette. This was until Trina became friends with her and she forced Bernadette to legally change her name to Mina so that their names would rhyme.

Mina has shoulder-length dark teal hair and black cat-eyed spectacles. She wears a burnt autumn turtleneck sleeveless sweater and military green shorts. She wears long, white above the knee socks and black, short-heeled plimsolls. She has thick black eyebrows and is of average height.

Mina is a kind, shy, timid and naive girl that is loyal to Trina and does whatever the latter commands. According to the series' creators, she and Trina genuinely care about each other (having been friends since kindergarten) and Mina endures all of Trina's abuse in hopes that Trina will one day go back to being the nice person she used to be. Mina is a sweet and selfless girl who is always being kind to anyone no matter who they are and what they do. She seems to be friends with Trina and at the same time, is being nice to her worst enemies. She doesn't seem to care when she gets abused and hurt, which is seen mostly when it shows how terribly Trina hurts her. No matter how much she gets disrespected by someone, she will always continue to respect and be nice to that person.

Mina is also very intelligent and great at math. She is one of the nerds at Elementary High, and is part of the nerd club. She also has strange abilities and surprising strength for her size, such as being able to throw people out of a crowd with her sharp elbows at Candy Jams's concert and being able to carry Trina a long distance.

For more information about this section, visit: Trina and Mina

Trina is Mina's best friend, but Trina seems to abuse her and mistreat her like a slave. Mina seems to be okay with that most of the time. Trina usually scares her with the way she always yells and seems so mean. Mina would probably be a much nicer girl if it were not for Trina forcing her to do evil things and trying to ruin Grojband. Even after all of the mean things Trina does to her, she still seems to be okay with being her friend. Despite her constant mistreatment, there are times such as Group Hug where Mina shows just how much she values her friendship with Trina, and how much Trina genuinely needs Mina. Mina goes out of her way to do whatever she wants for Trina because the former loves her so much. Although Mina has always been the underdog in her relationship with Trina, she has been seen standing up to Trina and dominating her in the episodes A Knight to Remember and the series finale.

For more information about this section, visit: Mina and Nick

Like many girls, Mina is in love with 16-year old Nick, but she mostly finds herself having to help hook him up with Trina, rather than doing what she wants to do and dating him herself. This is probably because she's a nerd and thinks she has no chance with a guy as hot and popular as him. She doesn't even bother trying, but when things come up with her actually thinking he might have chances with her, she seems to be more in love with him than ever. Mina goes on a double date with Nick in Saxsquatch and he seems to like Mina more than Trina.

Working alongside Trina, Mina does everything Trina does, meaning that Mina must hate Grojband. However, these may not be Mina's true feelings for them. Being the nice and happy girl she is, Mina gets along with everybody which means that she might truly like Grojband but she acts as though she hates them because Trina makes her.

For more information about this section, visit: Mina and Carrie

Carrie is Mina's younger sister. Although they haven't been seen interacting much in the show, the two of them are shown to get along and love each other dearly on the occasions that they do. In the episode Space Jammin', Mina was seen waiting to see Carrie's performance at Sludgefest. Also in this episode, Mina states that she is her sister. When Corey asked Mina where Trina was, Mina replied with, "My sister just came down and took her into a large spaceship". In the episode Kon-Fusion, the two of them fumped each other and said "Fumps up sis!" in a happy way when they saw each other.

To see a list of quotes made by Mina Beff, come here.

Although she is a main character, Mina has constantly been neglected, left without dialogue, or even completely cut out of certain episodes.

For more information about this section, visit: Mina Beff/Gallery 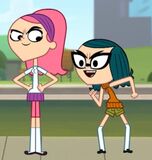 Retrieved from "https://grojband.fandom.com/wiki/Mina_Beff?oldid=54827"
Community content is available under CC-BY-SA unless otherwise noted.