In this episode, Trina destroys Corey's favorite childhood band, The Bubble Bunch Band, Corey and his band decide to replace that band with themselves by turning Grojband into an animatronic puppet band. The only problem is, they don't have lyrics.

Laney and Kin are outside the bathroom, trying to get Kon to come out but he's playing giant with the tiny soaps. Kon protests and tells her he's not doing that this time. Corey comes in waving his arms excitedly, startling Kin and Laney. Corey shows them a poster of a band called the Bubble Bunch Band, but Kin and Laney only exchange confused looks. Corey then explains that the Bubble Bunch Band is a mechanical band of colorful creatures who play songs for little kids, and they're going to be playing in concert, live in Peaceville. Corey declares that he wants to go see them play because they're what inspired him to start up a band in the first place. Trina busts into the room along with Mina after hearing Corey talk about the band. She makes fun of band and says that their just a bunch of robotic puppets but then Corey tells her that they're real and the bandleader Bobby Blue, is what inspired him to start up his band in the first place. He says Bobby Blue was his favorite and he inspired him to become the leader of his own band. Trina stops the scene after she hears that The Bubble Bunch band is what caused Corey to start the band she hates so much. She then plots to destroy The Bubble Bunch Band while Corey plots to thank them. Kin and Laney don't seem to have any interest in this but they go along with Corey anyway. Kon, still is the bathroom asks what they're going to be doing in this episode.

Trina and Mina are in Trina's Room, where Mina asks Trina why she wishes to destroy The Bubble Bunch Band. Trina tells her that it's because she is afraid of puppets, which is why she wants them destroyed. Mina then asks Trina why she's afraid of puppets, to which Trina has a flashback to an incident of when she was a little child. The flashback shows a young Trina in a store looking at a shelf full of puppets. She then finds a puppet of a pink Princess and she tries to take it off the shelf. She climbs up on the shelf, but then it breaks and all of the puppets fall off the shelf and land on her. She gets out of the pile of puppets, holding her pink puppet and she hugs it. She walks through the store happily playing with her puppet when a horrifying clown puppet with a scary, demented face drops out of nowhere, hanging from strings and scares her. The clown puppet starts to come after her and she screams in fear and runs away in fear only to be stopped by another scary puppet of a demonic magician. She screams again and then asks her Princess puppet for help. She looks at her princess puppet to see that her face has suddenly become a horrifying monster face. She screams in terror and she develops a raging fear of puppets. The flashback ends and Trina is still shaking in fear just thinking about the incident.

Corey takes his bandmates to watch The Bubble Bunch Band play live in concert. Everyone else in the audience is a bunch of little kids which embarrass Kin, Kon, and Laney but Corey doesn't seem to care. Two guys named Captain Carney and Carney Kid get up on stage and they introduce the audience to The Bubble Bunch Band and they play their music. The Band starts playing music and Corey is mesmerized by them while his bandmates are bored by them. Corey still doesn't seem to realize that The Bubble Bunch Band isn't real, as he is surprised to see that Bobby Blue hasn't aged a bit. Suddenly, there is a problem with the machines which causes them to malfunction. The Band begins to melt, fall apart, and burn. As Corey watches this happen, his overly happy face turns into a horrified frown of fear as he is shocked to see this happen. Kin, Kon, and Laney on the other hand, smile and watch excitedly as they like to see this happening. Corey starts freaking out and asks how the band can still play while they burn and fall apart. Finally, the band explodes all over the stage terrifying the kids in the audience. Corey is saddened to see this happen to his favorite band while the others enjoyed watching it happen. Captain Carney is in a state of shock and Corey comes up and tells him that he might be able to get his band to replace them. Captain Carney tells him that the only way for them to play is if they were a mechanical band and Corey tells him that he can do that.

Grojband is later seen in their garage where they're waiting for mechanical puppets of themselves that Corey ordered. When their delivery arrives, they all find their puppets which look exactly like them except for Laney who finds a puppet who looks like a man. The other members of the band don't see the difference which angers Laney. They all start to practice with their puppets by putting on their suits and controlling them. They play music with them and it works successfully and then they leave. After their gone, Trina is seen to have been spying on them from her car the whole time. She plots to destroy their puppets. She makes Mina stuff the puppets with explosive capsules of green goo.

In the next Captain Carney show, Grojband's mechanical puppets are on stage ready for their performance, but when the show starts, they don't have any lyrics. They all start fighting with each other backstage because they have no lyrics which causes their puppets to do so on stage in front of the crowd. Trina is watching them from above the stage and she hits a button on a remote which blows them up with and the green goo explodes all over the place horrifying the kids again ruining another play. After figuring out Trina was the one who caused that to happen, Corey has an idea on how to get revenge and play a gig for the kids.

The band pretends that their puppets are coming back from the dead to get revenge on Trina for blowing than up and they terrify her. She gets so freaked out she goes into Fear Diary Mode. Corey gets the lyrics and he and his band play a song which the kids love. Captain Carney offers them a full-time gig but Corey refuses, tells his moral and closes the garage door and the episode ends.

For more information about this section, visit: No Strings Attached/Gallery 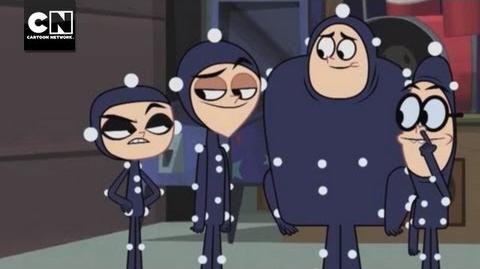 Retrieved from "https://grojband.fandom.com/wiki/No_Strings_Attached?oldid=54402"
Community content is available under CC-BY-SA unless otherwise noted.