Party Danimal is a recurring character in Grojband. He is an official party critic who is known for rating and reviewing people's parties. He is voiced by Christian Potenza.

He appeared in the episode "Pox N Roll" where he gave a review on Corey's chicken pox party. At first, he was giving them a very negative rating, but when Corey played his music with Grojband, things got better with the reviews and Party Danimal gave them 10 awesomes plus. He went on to make cameo appearances in several later episodes.

Party Danimal is a tall white teenager with long, curly brownish red hair that he wears a yellow baseball cap on. He has a green shirt with a picture of a hand making the rock symbol on it and he wears a black sweater under it. He has tan jeans and red shoes with white socks.

Party Danimal is what his name would imply, a party animal. However, he is not as crazy and care free as most other party animals. Party Danimal is not as easy to please and will find himself unsatisfied and disappointed if the party he goes to doesn't meet a certain quota. This is what makes him the judgmental guy he is now and what got him his job as a very popularly known party critic. 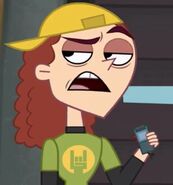 Add a photo to this gallery
Retrieved from "https://grojband.fandom.com/wiki/Party_Danimal?oldid=51878"
Community content is available under CC-BY-SA unless otherwise noted.