Start a Wiki
Space Jammin' is the eighth episode of season one of Grojband. It is the eighth episode overall. In this episode, Grojband gets into a battle of the bands with The Newmans but while they get ready for it, they get themselves into another battle of the bands with a gang of evil alien space orbs at the same time. This episode aired as the first episode of a two-episode per block along with Wish Upon a Jug. It is written by Todd Kauffman.

Grojband faces off against The Newmans in a battle of the bands. Meanwhile, some evil Space Orbs possess the bodies of The Newmans and steal Trina Riffin from them so that they can't get her lyrics.

Laney is sitting at the computer complaining about how The Newmans are taking the center stage at SludgeFest. Kon tells her that it must be even worse for Corey being the one who is the most determined to be better than the Newmans. Kin says that he will be able to make him forget the whole thing with the machine that he invented. He shows the machine he's been working on and it turns out to be a rubber mallet. He explains that all he needs to do is whack Corey on the head with it and he will forget the whole thing. Laney tells him that he doesn't need to result to that but just then, Corey comes riding lawnmower into the garage, making her change her mind and telling him to do it to him twice. Corey tells them that if they can't play at Sludge Fest, then they are just going to mow down the cornfield next to it and host their own music festival next to them. Trina walks into the garage and says that she's been waiting in line for Sludge Fest with Nick Mallory for over a week and that she's coming back for a bathroom break while Mina holds her place. Corey taunts her by telling that if she leaves Nick and Mina alone together, they will fall in love. Trina imagines what it would be like if that happened and she screams in fear. Then, she immediately changes her actions and reacts as if she doesn't care. She then tells Corey that she doesn't want his music ruining her time with Nick Mallory at Sludge Fest and she throws a wrench in the lawnmower's engine causing it to malfunction and start wildly moving out of control.

The lawnmower goes over to the cornfield and starts mowing down a bunch of corn and Corey is trying to control it. He and his friends fall off of it and the lawnmower still continues to move on its own and mow away a bunch of corn. Just then, a giant U.F.O. drops from the sky and lands on the ground in front of them and a group of Space Orbs come out of it. The first one introduces himself to be named "G'ORB" and he tells them that he accepts the battle of the bands that Grojband challenged them to. Confused, Corey asks them what he means. He tells him that he wrote a challenge for them in the corn using a lawnmower and that they accept. Corey tells them that it was unintentional and he does not really want to challenge them to a battle of the bands. G'ORB taunts him by telling him that it's best that he didn't really want to challenge them because it's better to heed his human fear, intimidating Corey and making him agree to have a battle of the bands with him instead. The space orbs go back go their U.F.O. and G'ORB stops, turns around, and threatens to destroy their world if they lose before entering the U.F.O. and flying away. Laney freaks out about how Corey accepted that challenge because they don't even have lyrics at the same time another one of the space orbs does to G'ORB. The other space orbs tell them that in order to play music in a battle of the bands with them, they need lyrics, human bodies, and instruments. G'ORB tells them that he has the perfect idea on how to get those things and that is an abduction. Meanwhile back on earth, Laney tells Corey the top 20 reasons why the challenge is a bad idea while the space orbs abduct Kon. They imprison him in their U.F.O. and force them against his own will to tell them how his band writes music and how they can do it too. Kon refuses to do so at first, but after they point a bunch of weaponry at him, he cringes in fear and tells them the answer to everything. After that, one of the space orbs comes up with an apron on and talks about his recipe for pancakes.

Corey, Kin, and Laney are walking through the cornfield and Kin suggests that they turn around to see if Kon has gone missing yet. After they turn around, they see Kon fall from the sky and land face flat on the ground. They quickly rush up to him and Corey asks if he's okay. Kon tells them that he already told the orbs everything about Trina and her diary and how they make music. The Orbs have all the information they need to know to make their own music to beat them in a battle of the bands. Nick and Mina are still waiting in line at Sludge Fest and Nick offers Mina gum. Mina takes the gum and Trina runs up and pulls her away from him, getting extremely mad at her for talking to Nick thinking that she's trying to steal him from her. Mina tells Trina that she just wants to see her sister play in the show but Trina thinks she's just being selfish. The Newmans are backstage getting ready for their gig while the space orbs are above them, watching, disguised as stage lights. They decide that they can possess their bodies and use them in the battle of the bands. G'ORB jumps down and possesses Carrie and the other space orbs possess Kim, Konnie, and Lenny. G'ORB reads Carrie's mind and can tell that her sister Mina is with Trina at all times and that he can contact her so that they can get her and her lyrics. G'ORB calls Mina and she tells them where Trina is. They fly the U.F.O. over to Sludge Fest and G'ORB drops down in Carrie's body and kidnaps Trina and takes her back up into the U.F.O. with them. Trina yells down at Mina telling her not to talk to Nick and Grojband runs up to get Trina. The space orbs tell them that they've got Trina and her diary and they fly off with them. Corey thinks that they have lost and there's no way for them to win the competition until Laney tells him that the space orbs aren't getting lyrics from Trina's diary the same way Grojband does. They always change her diary lyrics word for word so that she doesn't catch on to the way they steal her lyrics and so that they can make their song more original. The space orbs are going to read Trina's diary out loud in public which will not only make a horrible song but will also send Trina into Diary Mode causing her to write better lyrics for themselves so that they can make a new song to win the battle of the bands.

At the competition for Sludge Fest, G'ORB and the orbs get up on stage and he introduces his band as The Orb Experience. They take out her diary and start playing music while G'ORB reads one of Trina's diary entries out loud in front of the crowd. When Trina hears them, she realises that those are her words and becomes angry. After they sing their song, Mina tells Trina if she actually thinks that she and Nick will fall in love together. Trina ‘laughs‘ it off as a ‘funny joke’ and goes into Diary Mode. Grojband takes her diary, and they turn her entry into lyrics for a new song. Their song wins them the competition and the space orbs leave the bodies of The Newmans making them fall asleep on the stage. The space orbs argue with each other because of them losing and they get back into the U.F.O. and fly home. Laney asks Corey if he has any ideas for his own lyrics and Corey tells a very profound moral that is so good that they could have used it for lyrics. When Corey believes that he can use his morals for lyrics and that he does not need Trina's diary, he burps in Laney's face and realizes that it was just indigestion. Corey closes the garage door and the episode ends.

For more information about this section, visit: Space Jammin'/Gallery 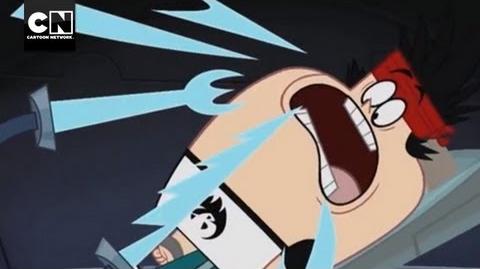 Retrieved from "https://grojband.fandom.com/wiki/Space_Jammin%27?oldid=52398"
Community content is available under CC-BY-SA unless otherwise noted.