The Newmans is the rival band of Grojband. They are exactly like their rival band's members, only that their genders are the opposite. They have chorded voices and their main goal is to become bigger than Grojband but, despite their efforts, their schemes normally fail. They serve as major antagonists of the show. Their band is made of Carrie Beff, Lenny Nepp, Kim Kagami, and Konnie Kagami.

They first appeared in the episode "Space Jammin'" where they had a gig booked at Sludgefest. Grojband was jealous of them for playing at the biggest festival of the year. Later, while the Newmans were rehearsing for the battle of the bands, their bodies got possessed by the Space Orbs who challenged Grojband to a battle of the bands at the same time and they used the bodies of the Newmans to help them play. The Space Orbs, not knowing how to get lyrics properly, did a terrible job at singing and cost the Newmans a Battle of the Bands that they would've won.

The Newmans second appearance was in the episode "Creepaway Camp" where they went up against Grojband in a battle of the bands at Camp Screamly. The contest was for who could write and sing a scarier song. The Newmans were gaining more popularity from the other kids at the camp and they were also getting more respect from Trina, who was the head councillor of the camp. Grojband got help from the legendary campfire monster, Blade Stabbington, to help them make their song scarier. In the battle of the bands, it was Grojband that had a better song, which had the Newmans running away in fear at the end of the episode.

The Newmans appeared again in the episode "Rock the House" where Grojband entered the school's extreme curling competition, only to find out that their opponents were The Newmans. The Newmans played their game and won the first few matches. Lenny was too scared to do anything and wanted to quit and Carrie kept trying to force him to do it, however, Carrie's plan didn't work as he jumped away before even getting anywhere near Laney. Eventually, Grojband won the extreme winter Olympics and The Newmans all went home unhappy. They again returned in the episode "Wish Upon a Jug" where Trina wished that they were the biggest band ever while in a 'wishing war' with Corey and they literally grew much taller, to the size of buildings, crushing everything. When Trina was writing in her diary, lightning started flashing around them. Corey had a plan that knocked them back down to their normal size again leaving them crushed under the giant hat they were previously wearing. This was their first minor role. Their next appearance was also a minor role and was in the episode "Grin Reaper" Trina presented them on stage because it was Grojband's most hated band and she was happy to have them play in public right in front of them. The Newmans were shown to be under the control of the Grin Reaper and they played a happy song. Being under the control of the Grin Reaper as well, instead of Grojband hating them, they loved them and they danced and trotted around the park loving their music. After they finished their song, Corey was about to clap for them but he realized how wrong it was. He tried to fight the force and then bit his band off making him hate The Newmans again. The Newmans made a cameo in the episode, "Six Strings of Evil" where they were playing music in the park and Corey and his evil guitar came up and sent them flying into the air. They appeared again in the episode "Kon-Fusion" where Corey and Carrie had the idea to combine both of their bands together to make themselves a band called "The Grojmans" and make a song with both of them in there. Once they combined themselves, Corey was clueless on what to do for lyrics for their song. He wanted to get some out of Trina by making her go into Diary Mode, but he didn't want for Carrie to figure out where he got lyrics from. He wanted to make himself and his band look good in front of her by making her think that they write their own lyrics. Kon and Konnie became the best of friends when being stuck together making Kin and Kim jealous and Laney and Lenny both admitted that they had crushes on their band leaders to each other and talked about it together. At the end of the episode, Corey got lyrics from Trina without having The Newmans notice and they played a song on stage. In the end, Kin and Kim re-calibrated the Fusion Mixer so that it would separate them. After Corey finished his moral and closed the garage door, they all went in to get defused.

Carrie is the lead singer and guitarist of the band. She is the female version of Corey. She looks exactly like him only she has longer hair and a more female-like figure of a body. There are a bow and eyelashes on the skull on her hat. She wears dark black mascara and a skirt that is the same color as Corey's shorts. Her voice is more high-pitched than Corey's. Carrie is very determined to make her band popular. All of her ideas and plans to do this are very bad and always end up failing. When it comes to Grojband, she wants to make her band bigger and better than theirs but these plans always fail as well. Out of all of the members of Grojband, Carrie hates Corey the most given that he is her gender opposite. Whenever they meet, they always get themselves into a burn battle followed by a battle of the bands. Although she hates Corey and Grojband with a burning passion, she will occasionally let her bad ideas get the best of her which results in her teaming up with Grojband as seen in the episode Kon-Fusion. Although she teamed up with Corey in this episode and temporarily became his friend, she was still annoyed with him and still showed some disrespect for him, meaning that they were frenemies for a while before turning back into enemies. It was revealed in the same episode, that unlike Corey, Carrie is perfectly capable of writing her own lyrics even without the rest of her band. She is also the younger sister of Mina.

Kim is the keyboardist of the band. She is the female version of Kin. She looks just like him only she has long hair, a red hairband and a bandana around her neck. Her voice sounds different from Kin's. It is of a higher pitch and it is a bit less gravely. However, it still has a bit of a squeaky tone to it. She is also a technology nerd and she makes all kinds of inventions. She is best friends with her twin sister Konnie.

Konnie is the drum player of the band. She is the female version of Kon. She looks exactly like him only with long blonde hair and a skirt instead of pants. The logo on her shirt is the letter N, which stands for the name of her band. Her voice seems to be just like his and unlike the rest of the members of the band, Konnie's voice is exactly the same as Kon's, making her have a surprisingly deep voice for a girl. She is best friends with her twin sister Kim.

Lenny is the bass player of the band. He is the male version of Laney. He looks just like her only he has shorter hair. His voice is a bit more masculine and slightly deeper than Laney's. He also has a crush on Carrie, and just like Laney and her crush on Corey, Lenny is too afraid to tell her while she is completely oblivious to it. Lenny is always trying to tell Carrie that her plans to make their band popular won't work but Carrie never listens to him. Although he is the smartest and most sane member of the band, Lenny gets the least amount of respect. 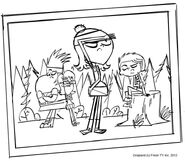 Original Designs for The Newmans

Retrieved from "https://grojband.fandom.com/wiki/The_Newmans?oldid=53626"
Community content is available under CC-BY-SA unless otherwise noted.