The Snuffles with Snarffles is the fourteenth episode of season two of Grojband. It is the fortieth episode overall.

Grojband makes a video to help Snarffles the dog, dragging attention away from an evil cat named Wheelie, who Trina adopts to help destroy Grojband.

Everyone in Peaceville reads Chance Happening's Animal Blog. Chance updates it with a story about Wheelie, a cat war hero who travels by roller-skate before Snarffles, a puppy, sneezes and steals the limelight. Grojband decides to make a video about Snarffles to get people to donate to him so they can be come the go-to video band. Meanwhile, Trina hates how everyone likes Snarffles, then she sees Wheelie try to attack him and ends up wanting to help Wheelie by adopting him.

Grojband's video has gone viral and everyone in town is donating money, boats and laser drills to Snarffles, so Mayor Mellow decides to give Grojband the key to the city, but it turns out that Peaceville gave all of their money to Snarffles and the town is now bankrupt. Meanwhile, Trina is stealing all of Snarffles' gifts for Wheelie's revenge plan to destroy Grojband and Snarffles.

The entire town is angry at Grojband and have trapped them in their garage, but Trina and Wheelie are also in there, ready to laser Grojband. Corey decides to let Trina laser him so that she will write in her diary about how happy she is, they'll break free, and make a lol-cat video for Wheelie. This works, Trina goes into Love Diary Mode and knocks the laser around, breaking the ropes that tie up Grojband. They then give Wheelie his squeaky toy, make the lol-cat video with the lyrics, the town loves it and gets their money back, Corey tells his moral, and finally signs off the episode. 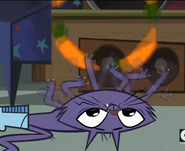 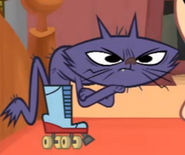 Retrieved from "https://grojband.fandom.com/wiki/The_Snuffles_with_Snarffles?oldid=54434"
Community content is available under CC-BY-SA unless otherwise noted.