Corey tries to make Grojband a jug band so they can perform at the Rodeo Throw. He takes a whole bunch of jugs to the garage and, Trina finds one that contains a genie, and wishes for her brother and his band to lose the ability to play music and to go on a date with Nick Mallory. Corey finds another genie and gets into a wish war with Trina.

The episode begins with the garage door opening revealing a huge wall of jugs piled up behind it. They all fall out onto the floor and then Corey, Kin, Kon, and Laney come out of the pile. Laney asks Corey how many jugs a jug band needs and Corey tells her that they only need one jug. Laney facetiously tells him that she thinks that their good. Kin and Kon show that they are excited about becoming a jug band. Then Laney asks how to play one which Kin and Kon respond to with a flashback story about something that happened in the history of Rock Lore. They tell the story about their ancestors being in a strong heat wave. They traded their musical instruments for jugs of root beer to cool themselves down in the heatwave. However, the heat wave was so strong that it evaporated all of the root beer causing them to cry. When they cried, they breathed into the jugs accidentally discovering that they could play music in them. They immediately got over the fact that they had nothing to drink and started playing jug music. Laney predicts that in the end of the story they toured around playing jug music forever but Kin and Kon instead tell her that they died of thirst because it was so hot and they weren't drinking anything.

The next scene shows Mina trying on a cowboy hat in the mirror. Trina walks up to her and asks her why she's wearing that. Mina tells her that it's because of the Peaceville Hoedown that will be happening tonight. She shows her the commercial for it on her phone. A commercial with Mayor Mellow advertises the Hoedown as the Rodeo Throw. Out of rage, Trina throws her phone out the window saying that she hates Hoedowns and everything about them and that even the sound of bumpkins make her mouth hurt. Just then, she hears Grojband playing jug music in the garage causing her mouth to hurt. Trina goes downstairs and smashes their jugs. Corey tells her that they need those to play in their jug band and Trina tells him that that gives her another reason to smash them while she rubs one of them causing a genie named Cleat to come out of it. Cleat tells Trina that she has three wishes and without even hesitating or asking any questions, she immediately wishes for her brother and his band to be unable to play music. Cleat grants her wish by spitting on the ground. Next, she wishes to be on a date with Nick Mallory and he spits on the ground to grant that wish too causing them to disappear. Confused, Laney asks what happened and Corey explains to her that Trina wished that her brother and his band couldn't play music anymore.

They try to prove that the magic is fake and nothing really happened by playing music only to realize that the really can't play music. (Which makes them play horribly as a result). Kin and Kon then start running around and screaming in a panic because they can't play while Laney stands there with a dull expression on her face. Corey tells them that he has the idea to find another jug with another genie in it that they will use to make themselves play again. Laney starts to tell him that it would be impossible to do that, until Corey immediately finds a jug that makes a genie named Bessie come out. Corey tells her that it would have been impossible to find one genie in the first place. Corey wishes to be able to play music again but Bessie tells him that she can't grant that wish because that would be undoing another genie's magic which is against the rules. As an alternative, Corey wishes to be with Trina on her date with Nick Mallory. Bessie rings her bell to grant is wish and they magically appear on Trina and Nick's date at the Rodeo Throw. Nick Mallory is confused as to why he's suddenly on a date with Trina and Trina is pretending that she likes country things. Corey wishes that Trina had a pig face, Bessie sighs and grants his wish. Nick Mallory leaves the table to go get some corn dogs and Trina's face turns into a pig's face. Trina snorts in disgust over corn dogs and then comes the the realization that nothing makes her snort. Mina comes up with some make up and seems to quickly be trying to cover up her pig face without her noticing. Trina looks in the mirror and squeals as the mirror breaks because of how ugly she looks. Immediately she wishes her face back to normal again so that Nick Mallory won't see her but Cleat tells her that he can't grant her wish because someone else wished her face that way. Trina soon realizes that Corey found another genie and caused this to happen. Trina challenges Corey to a wish war. Corey tells her that she only has one wish left and that she'd better make it count. Trina wishes for a million wishes and Cleat grants it to her. Corey wishes for a million wishes and Bessie grants it for him. Trina wishes that Corey was as gross as she thinks she is and Corey gets covered in a bunch of mud. Corey wishes that he could give Trina a hug and his wish causes her to get dragged over to him where he hugs her and gets her muddy. Trina wishes that she was electrified and her electricity shocks Corey making him fall off her. Corey wishes that Trina was always itchy and Trina starts painfully itching and scratching herself. Trina wishes that The Newmans were the biggest band in the world. Corey screams in fear as her wish gets granted. The Newmans gather around the barn and are shown to literally be the biggest band in the world and they laugh at how much bigger they are than Grojband. Corey wishes that The Newmans would go to the mall. His wish gets granted and offscreen, the sound of a building getting crushed is heard as well as Carrie's voice saying that she crushed the mall putting Trina into a state. Cleat says that this is worse than the time they gave wishes to that dog and cat. Bessie tells him that their family and they will stop fighting and get along with each other eventually.

6 Minutes later, Corey and Trina are in outer space and they are still in a wish war that continues to rage on. Corey wishes that the moon would explode so that Trina would never get a moonlight kiss. Bessie admits that Cleat was right and that their not getting along. Laney, Kin, and Kon tell Corey that he should stop the wish war because it's getting them nowhere. Then Corey says that he wishes that he knew a way to play music again. His wish gets granted giving him the perfect plan. Corey wishes that Trina could finish her date with Nick Mallory. Nick Mallory is back at the Showdown waiting for Trina who finally appears back on her date with her pig face. Nick Mallory tells her that he doesn't want to go out with her anymore because he doesn't dig abominations and he eats her food and leaves. Trina becomes enraged at Corey and wishes that they were unrelated and her wish gets granted. Laney asks what this has to do with them playing music again. Corey tells her that when Trina wished that they couldn't play music anymore, her exact words were that "Her brother and her brother's band couldn't play music anymore." Now that they are unrelated, Corey wasn't Trina's brother anymore and Kin, Kon, and Laney are no longer her brother's band, meaning they can play music again. Corey then wishes that Grojband were a really awesome jug band, so Bessie grants his wish and they all appear on stage to play their jug music. This makes Trina so mad, that she goes into Diary Mode. Corey gets her lyrics and puts them into a song. They sing I Wish Away My Wishes, on stage, during which Corey wishes for all of the wishes to be undone, which the genies carry out. After the song finishes, Corey wishes that they had never found the genies to begin with. This leads them to suddenly appear back in the garage at the start of the episode, only with the jugs replaced with a pile of beach balls. Corey tells his moral, with Laney feeling it was a bit early for that. Corey tells her that he's as confused as she is and closes the garage door ending the episode.

For more information about this section, visit: Wish Upon a Jug/Gallery 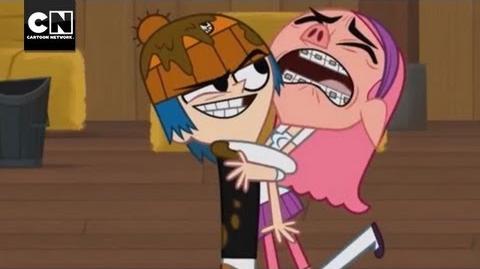 Retrieved from "https://grojband.fandom.com/wiki/Wish_Upon_a_Jug?oldid=54660"
Community content is available under CC-BY-SA unless otherwise noted.